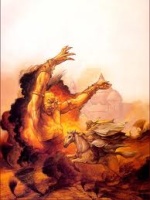 Plus more special rules than you can shake a plaguesword at... including a S:3 no armor saves breath weapon usable in assault 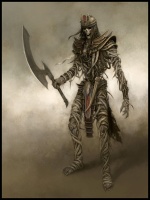 Repked egy ilyen pletyka is, persze hitelesnek nem nevezhető, de a GW-nél sosem lehet tudni:
"So, just got off the horn with a contact at GW who apparently has just come out of a briefing regarding the future of WHF
in May 2015 after the End of Times WHF will become a skirmish game centered around surviving warbands after the "armegeddon" of the fantasy world as a result of the End of Times.
Chaos decimate the Empire
Nagash and co decimate Brettonia
Ulthuan sinks
there will be less army books than currently ( no idea if this means imalgimation armies )

appreciate I do not post very often so will doubtless recieve a whole load of flame for this post BUT given i literally just got told it, thought some people here would appreciate me sharing..
Personally I hope to god this is all incorrect" 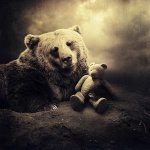 
The Return of Nagash is up on Black Library for advance order and there is a sample up too. The sample's prologue sets up a lot of the End of Times world so I thought I'd share that with you here. The framing is Manfred scrying in a bowl of blood and looking around the world. These are the main things he sees in order;

-A twin tailed comet
-A "storm of chaos" sweeping the world; random deamonic manifestations are popping up all over the world. All small and lasting only a short time.
-Valkia is leading a huge Khornate army against Naggarond
-Massive daemonic incursion in Lustria. The jungles burn.
-Huge daemonic invasion of Ulthuan.
-In Brettonia Mallobaude, the bastard son of Leoncouer, leads a joint army of disgraced knights and the undead (backed up by Arkhan of all people) kills his father.
-Deamonic invasions of the dwarf hold Copper mountain and Neferata's Silver Pinnacle, but the deamons just pop out of existance half way through the battles.
-Massive Nurgle-y plague in Middenheim
-In Athel Loren the Vaults of Winter break open and the great trees, including the Oak of Ages, split open to reveal they are filled with maggots.
-Gotrek chopping up beastmen in some Kislevite city. No sign of Felix.
-Another daemon invasion in Averland. This one too, just disappears as soon as it hits the walls of Averheim.
-Massive stone monoliths, big as skyscrapers grow out of the ground around the world. Become focal points for beastmen to flock to them.
-Riots in Nuln. Nobles attacked and either hanged or torn apart. Implied death of the Countess.
-The Tsarina is still alive in Kislev leading a counter-attack against Chaos horde.
-The Green Knight takes off his helmet and is revealed as Giles le Breton returned (later in the sample it says he killed Mallobaude).
-A multi-province Empire army defeats a Chaos army lead by Vilitch the Curseling as he besieges them.
-Chaos hoarde attacking the Great Bastion.
-Tomb Kings, Dwarfs, Greenskins and Orges all readying for war and Skaven launching large scale invasion on Tilea and Estalia, quite successfully.
-At the north pole 4 impossibly gigantic deamon armies are forming. 4 Exalted daemons bow to Archaon

Lore attribute - when castin an incatation (new type of spells for this lore), each counter used gives you +10pts for the total amount you can raise.

Spell 2 - 7+ to cast; Hard to read, but it's something that give a single attacks that if it hit, is multi-wound D6 with no save. If this kill a character, you gain D6counter for the lore attribute.

Spell 3 - 8+ to cast; 2D6 +2 minus the target Ld to cause wounds with no armour. If you do at least one wound, you get D3 counter for the lore attribute.

Arkhan the Black; Level 4 wizard, access to Lore of Death and Lore of Undeath and can mix them. If he inflict at least a wound during CC, roll a dice. On 6+ he regain a wound. Crumble one less than normal (can be combined with other modifier). Also he can march. Arkhan double the number of points raise with the Lore of Undeath.

Magic item - Sword; Eachj wound cause heal him by one, maximum of 4 regained wound per phase.

Staff; Can store magic dice. Doesn't seems to talk about a limit.

Neferata; Level 3 wizard, access to Death, Shadow, Vampire, Undeath, and can mix and match. Can regain a wound on 6+ like Arkhan. If she kill a model in challenge, you get a free Vampire that you place within 12 inces. Enemy are at -1 to hit her, except for Khalida.

Magic item - Sword; If she wound in challenge, the enemy loos 1S, 1T and 1A permanatly. But can only be affected once.

Staff; When Neferata cast a magic missile, a direct damage or an hex, the target suffer an additional D3 S5 hit.

Mannfred; Level 4 wizard, access to Death, Vampire and Undeath and can mix and match. Can use up to 3 magic dice to get +1 attack per dice (can go beyond the maximum of 10). Also have the ability to heal a wound on a 6+.

Have the MAter of the Black Arts power. Also he double the range of the Lore of Undeath.

Magic item - Sword; Each unsaved wound gives him a magic dice. Maximum of 5 dice can be gained with it per phase.